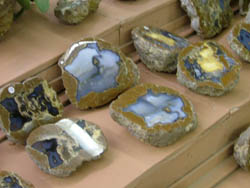 Thundereggs are agate-filled nodules found in various parts of the Western United States. They range in size from 1/4 inch to as large as 5 feet in diameter. Generally, they are about the size of oranges. All are similar on the exterior, but no two are alike in pattern, design or color on the inside. The most colorful and beautiful of Thundereggs comes from a small area in Jefferson County in Central Oregon (Pony Butte). In other localities they do not show such brilliant color and gem quality. In spite of their superior quality, only one in an average of twenty cut make outstanding specimens. These show vivid scenes of land and sea fantasies, which besides the bright hues, reveal the appearance of depth and dimension of distance. Cut and polished Thundereggs are beautiful to behold. They are one of the marvels of nature and are sought after and highly prized the world over. 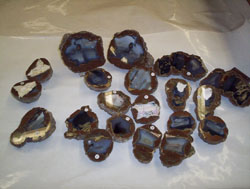 According to legend, Thundereggs were so named by Native Americans of Central Oregon. The natives of this region are said to have believed these strange, agate-filled stones were missiles thrown by angry, fighting “Thunder Spirits” or “Gods” who dwelt on Mount Jefferson and nearby Mount Hood, two of the several snow-capped peaks high in the Cascade Range. The Native Americans thought when thunderstorms occurred these rival, jealous gods hurled large numbers of the round-shaped rocks at each other in furious anger. Thus, according to Native American legend, Thundereggs were scattered over the high plateaus of Central Oregon.

The unique agate-filled mud balls are found in layers of rhyolite lava flows, which spread over the land an estimated 60 million years ago. This was long before man appeared on the earth and thousands of centuries before the Cascade Mountain range was formed and pushed upward, due to tremendous stress beneath the surface of the planet. Geologists reason that the round-shaped Thundereggs were formed in gas pockets, serving as molds, that were left in the lava plows of the Eocene Geological Age. Over long periods of time, the gas cavities or cooled bubbles were gradually filled by water percolating through the porous rock formations, water (hot or cold) oozing into the cavities carried rich quantities of silica (quartz). The solution lined and in many cases filled the cavity molds, first with the darker matrix material, then the inner core of agate or chalcedony. The beautiful and varying colors were derived from nearby minerals present in the soil. These processes are still going on, but at a much slower rate than during the times of volcanic action, with huge clouds and deposits of volcanic ash rich in silica (quartz). 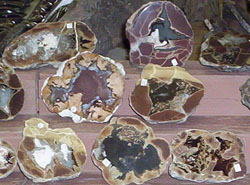 Many geologists agree that the materials used by nature in forming these exquisite agate-filled Thundereggs came from the surrounding rhyolite lava rock in which they were formed. The matrix and the agate centers were made and composed by water carrying silica and minerals in solution. The water by continuous action robbed the rhyolite flows of its rich silica composition, causing it to eventually decompose. The harder more durable agate materials stayed in place.

This is very likely the origin of Thundereggs. Many await discovery in the now loose beds of decomposed rhyolite – to be dug, sawed and polished by the expert craftsperson, thereby revealing the hidden beauty of this remarkable “Wonder of Nature”. The lasting enjoyment and adoration to all who are fortunate enough to view their splendor.